The politics of death in Mexico: dislocating human rights and asylum law through hybrid agents.

Abstract: In 2006 Mexico’s then-president Felipe Calderón declared war on drug trafficking. The human toll was devastating with the loss of over 95,000 lives and the forced disappearance of more than 27,000 people. In addition, two percent of the Mexican population was displaced with families forced to flee their homes in the face of criminal violence. This article offers an explanation of how death, forced disappearances, persecution and exile are in essence the specific effects of governmentalization of the Mexican state. This govern­mentalization includes the shared use, by criminals and authorities, of techniques for dominating the population and controlling the conduct of citizens through the practices of death, that is, by employing the politics of death (necropolitics). The article goes on to discuss how the objectives, rationality and governmentalization of the State serve to dislocate human rights discourse in such a way that its truth politics excludes people suffering serious human rights violations, such as Mexican asylum seekers. This is accompanied by a new mode of subjectivity produced by Mexico’s politics of death – the Endriago subject – which operates as a hybrid perpetrator of human rights violations. 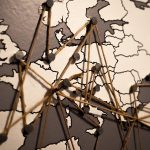